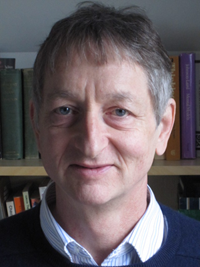 University of Toronto and Google Inc.

A few years ago, it became clear that acoustic models based on deep neural networks would soon replace Gaussian mixture models in speech recognition systems. Since then, deep neural networks have also proved to be far better than the previous state-of-the-art at object recognition. This required the use of a new type of "neuron" and also a new type of regularization that allows far bigger nets to be used without requiring any more training data. I will describe these innovations and show that they can be used to significantly improve the performance of deep neural nets on a variety of other tasks, including acoustic modeling.

Geoffrey Hinton received his BA in experimental psychology from Cambridge in 1970 and his PhD in Artificial Intelligence from Edinburgh in 1978.  He did postdoctoral work at Sussex University and the University of California San Diego and spent five years as a faculty member in the Computer Science department at Carnegie-Mellon University. He then became a fellow of the Canadian Institute for Advanced Research and moved to the Department of Computer Science at the University of Toronto. He spent three years from 1998 until 2001 setting up the Gatsby Computational Neuroscience Unit at University College London and then returned to the University of Toronto where he is a University Professor. He is the director of the program on "Neural Computation and Adaptive Perception" which is funded by the Canadian Institute for Advanced Research.

Geoffrey Hinton is a fellow of the Royal Society, the Royal Society of Canada, and the Association for the Advancement of Artificial Intelligence. He is an honorary foreign member of the American Academy of Arts and Sciences, and a former president of the Cognitive Science Society. He has received honorary doctorates from the University of Edinburgh and the University of Sussex. He was awarded the first David E. Rumelhart prize (2001), the IJCAI award for research excellence (2005), the IEEE Neural Network Pioneer award (1998), the ITAC/NSERC award for contributions to information technology (1992) the Killam prize for Engineering (2012) and the NSERC Herzberg Gold Medal (2010) which is Canada's top award in Science and Engineering.

Geoffrey Hinton designs machine learning algorithms. His aim is to discover a learning procedure that is efficient at finding complex structure in large, high-dimensional datasets and to show that this is how the brain learns to see. He was one of the researchers who introduced the back-propagation algorithm that has been widely used for practical applications. His other contributions to neural network research include Boltzmann machines, distributed representations, time-delay neural nets, mixtures of experts, variational learning, products of experts and deep belief nets.    His current main interest is in unsupervised learning procedures for multi-layer neural networks with rich sensory input.